New York: GPK Foundation America participated in a rally organized by “Queens Together” on July 29,2020 from 9 am to 10 am infront of Queens Borough Hall, New York. More than thirty small businesses’ owners were in this rally. The main purpose of this rally was to save & support small businesses in Queens demading help from NYS & NYC.

Journalists from Fox News, NY1, PIX11 and many other local journalists were present in the press conference.From GPK Foundation-President Somnath Ghimire, Vice President Subarna Lama, Central Member Surya Simkhada participated in the rally.Young Democrat Anil Pandey and leader from Tibetan Community Ngawang Yawagyentsang were also present in this rally. We are together for the better future of our small businesses in Queens and also working for the upliftment of our communities. 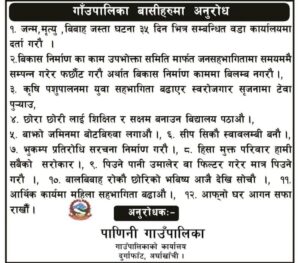 Our Country Needs A Watch Dog Psychological Distraction due to Confinement Lockdown

FECOFUN’s buildings can be used as quarantine wards